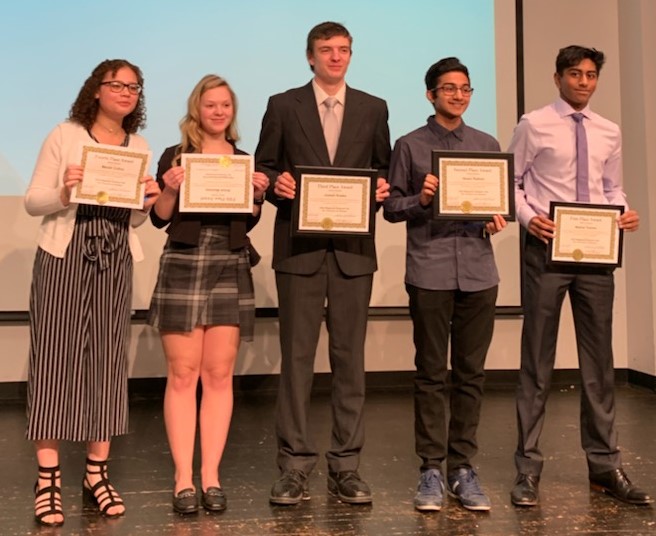 Eighty finalists across Elementary, Junior, and Senior Divisions were rewarded for their efforts with cash awards, trips and certificates. Five Senior Division students won all-expense paid trips to attend the Intel International Science & Engineering Fair in Phoenix in May. Seventeen Junior Division finalists were nominated for the Broadcom MASTERS competition that is held in Washington, DC in the fall.

Thirty different organizations, professional societies, individuals and agencies sponsored a total of 122 Special Awards which were presented to 105 students, including 25 non-finalists. These awards are selected by Special Award judges using the criteria of their award sponsor. Special Awards include certificates, prizes, cash awards, scholarships, and trips.

“It is very reassuring to talk with students and judge science fair projects—these kids are bright, inquisitive, and creative,” said John Wambaugh, Director of the Flint Regional Science Fair.   “They are developing critical thinking skills and real aptitude for science; and are developing confidence and communications skills that will be useful throughout their lives.” Wambaugh added, “In these challenging times it is reassuring to see what our youth, who will be the leaders of tomorrow, are doing.”

In addition to student recognition, the FRSF Board selected David Spence as the 2019 Teacher of The Year. Mr. Spence teaches science at Borland Elementary School in Imlay City and has a passion for science and encouraging kids to be inquirers and thinkers. Through his efforts many children have attended FRSF over the years, including 27 students this year.

Sign up for our newsletter and receive the latest updates on the Flint Regional Science & Engineering Fair.